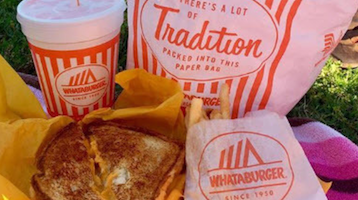 Texas fast-food giant Whataburger just beat out a number of other chains, as analyzed by the firm 101data. Whataburger garnered 44% of fast food burger interactions in our state, beating In-N-Out and Five Guys.

Whataburger is known for its iconic status in the Lone Star state and is famous for its commitment to build the burger “Just like you like it.” Chicken and breakfast meals are also available and very popular.

“I’m impressed with Whataburger in the end. Its menu is rather expansive for a burger joint, offering many other melts and chicken sandwiches as well as burgers, and the prices are average,” Business Insider’s Hollis Johnson wrote in his review of the chain. “The burgers themselves aren’t outstanding, but the option to customize the toppings to such a degree certainly is.”

While Whataburger has some limited expansion out of state, the majority of its stores are still in Texas, which lends itself to local popularity. This is a Texas franchise for sure.